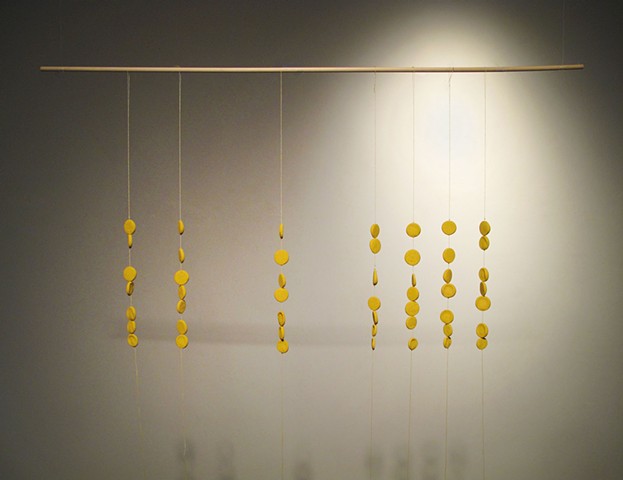 28/7/1973 explores the way families negotiate traditions, and how meaning and values are translated, performed, and remembered from generation to generation. Turmeric and ground mustard seed were used to transform the color and texture of the clay, which was then shaped into small discs, each one imprinted with one of the artist’s fingerprints. Turmeric is often used in Indian cuisine as well as many ceremonial rituals. The color of turmeric is similar to the yellow fields of flowering mustard seed, an iconic image of the Manitoban prairies, which is where Ramachandran grew up. In coming from the land, turmeric and mustard seed can be associated with a location, and they have a specific significance within their respective cultures. The discs have been arranged to resemble the numbers 28/7/1973, the wedding date of the artist’s parents, on an abacus. In Hindu culture, wedding dates are often chosen using astrological charts and considering planetary and star alignment. The artist’s parents chose to marry following Western North American wedding traditions, and did not incorporate the use of turmeric in their ceremony. They chose their wedding date for practical reasons; it was a long weekend in the summer, and they had some time off work. Creating this work was a way for Ramachandran to consider the choices her parents made in carrying out a significant ritual. Using the repetition of circular forms is also a way of 'aligning' the date, as well as connecting these small, intimate rituals with the greater cycles of life.